It’s already getting difficult to get to places far from home by sunrise. The Sun is now rising before 6 am and setting just before 10 pm while we gain nearly 7 minutes of daylight per day. So, Kate and I decided to take it easy on Sunday and left for Denali National Park shortly after 7 am. Despite getting there later in the morning after the haze started to set in, we were still greeted by the mountain!

The snow here is melting fast. In Fairbanks it’s been in the upper 40’s to mid-50’s almost every day. This day in the park was no different; we enjoyed the gorgeous blue skies, a bright Sun, warm air, and a cool breeze all day.

The spring opening of the Park Road started on Friday. Before the major tourism season starts the Park Road often opens up to mile 30 at the Teklanika River, normally you are only permitted to drive to the Savage River at mile 15. This last weekend was also the start of National Park Week and admission was free to all National Parks in the country. I don’t need a better incentive than that!

This was the first time in a while I did not see a moose in the park, but we weren’t totally without wildlife. Not far along the road beyond the Savage River Kate spotted a willow ptarmigan just starting to develop his summer plumage.

We stopped for a bit at the Sanctuary River. There was a channel that was already open as far as I could see.

There were a couple of cars at the Parking lot at the Teklanika River where the gate is up when we arrived. I was pretty surprised the place wasn’t packed, but I guess since it was Easter Sunday that maybe a lot of people weren’t going out. There’s a nice overlook of the river here, there were a few cracks and open spots on the river, but it’s still mostly frozen over.

We didn’t get too adventurous on this trip. Kate and I took about a 5 mile walk further down the road beyond the gate and wandered around on the river a bit, just enjoying the day. When we first arrived at the bridge some other hikers warned us that there was a bear about a quarter of a mile south on the river. It didn’t take long to spot the large grizzly that had clearly found something good just on a gravel bar. As far as I know, the first bears were spotted in the park on Friday, so we didn’t want to get any closer to this newly awakened and probably hungry brown bear. We spent about 20 minutes watching him from a good distance before continuing our walk.

A few more shots from our walk:

The sparse boreal landscape just west of the Teklanika River. Watching the river flow under the ice on the Teklanika River.

Driving out of the Park before the Savage River. Such a vast landscape.

On the way home we stopped in Nenana so I could get a picture of the tripod before the Tanana River goes out. With the weather staying like this, I suspect it won’t be too long. The tripod is used for a contest known around Alaska as the Nenana Ice Classic. People buy tickets to guess when the river will break up. Last year the jackpot was $318,500. This year we forgot to buy tickets in time. Lame.

The tower that holds the timer for the tripod line. St. Mark’s Episcopal Church is in the background.

The tripod – notice the open water and overflow in the foreground!

Another great weekend in the Alaska interior! More photos will be posted here: https://photos.lwpetersen.com/Date/2014/April/2014-04-20/ as I get around to them.

Mt. Healy, High Blood Pressure, and Not COVID – July 2020
In late July, Cat and I attempted to hike Mt. Healy via Bison Gulch, just south of Healy, Alaska. It gets added to the list of failed attempts on my...
140 Likes 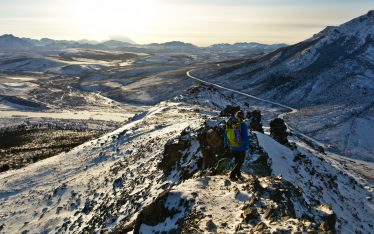