The Alaska Highway Fights Back 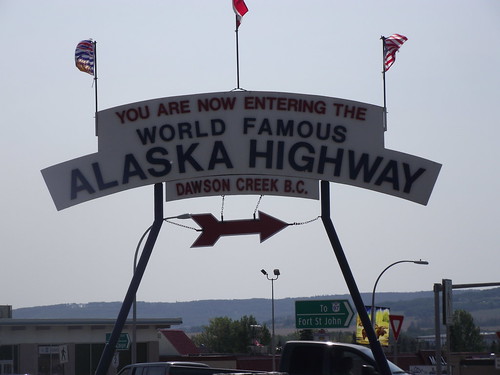 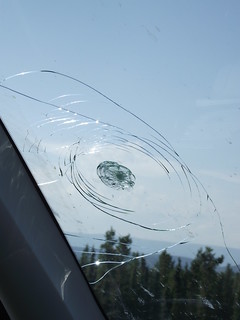 It’s day five and we have arrived in Ft. Nelson, British Columbia. After finally arriving on the Alaska Highway after a little over 3000 miles the car took its first hard hit. Coming down some big hill in the foothills of the Canadian Rockies a construction (or oil) vehicle threw a rock into our windshield and smashed it pretty good. We can still see out of it, but it’s a bummer that now our brand new vehicle is going to need a new windshield.

After getting on the highway we both noticed there were a lot of trees. They seemed to stretch on forever, like nothing I have ever seen before. There wasn’t much else. A black bear ran out of the woods, up to the side of the road opposite to us, looked around and ran back. I think he moved thirty feet in three leaps.

Next we ran into some construction, and the road became dirt for about 10 miles or so. In about 30 meters of roadway we saw the squiggly road sign, with 8% grade, and loose gravel, and moose crossing, and extreme dust, and probably other warning signs we couldn’t see because of the dust.

Those are the big things that happened today. I’ll post some more about the trip in general later.

A little winter delight
I've been out taking lots of photos of our beautiful boreal forests, snow and snowflakes, and the winter light the last few weeks. Recently I wrote about how I had...
3 Likes