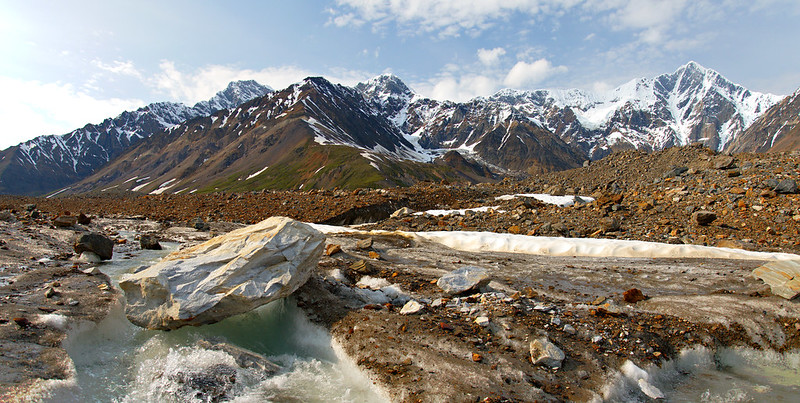 This was some of the best light I have ever seen in the mountains. This is still many hours before sunset, but the Sun is already getting quite low. A medium sized stream roars past boulders of different shapes, sizes and colors. McGinnis Peak rises above everything else. This was just a short minute or two walk from our campsite on the Black Rapids Glacier.

[Since I took a lot of pictures and don’t have a lot of time for a long post, I’ve attached a slideshow at the bottom. Also, all pictures are in the flickr set: Black Rapids Field Work July 2012. Descriptions are available on the pictures.]

Last week we returned to the Black Rapids Glacier. The purpose of this trip was to do any maintenance that needed to be done on the GPS, camera, pressure sensor, and drawires that we installed last April. We also download all the data and photos that have been collected since spring. The plan was to fly in with Paul Claus from Ultima Thule Outfitters in his Supercub and then spend two nights on the ice with three working days.

Leaving on Wednesday it took four trips to get all of us and our gear out to a campsite and we hit the ice running. By the end of the day we had visited all the GPS sites on the main branch of the glacier, brought air-cell batteries out to the station that will stay out over the winter, downloaded data from the drawire (a transducer with a wire frozen into the ice that measures melt), and Martin managed to get to the time-lapse camera closest to our camp and downloaded all the photos. All the equipment was in great condition, working, and standing upright. After finishing everything we could possibly get to by dinner we did a little rock collecting on the moraine for fun and ate dinner. We decided that if the equipment was in the same condition on the Loket tributary and the upper cameras that we could leave the next day.

Waking up the next day we had coffee and a variety of breakfasts and then split up. Paul flew Martin, his cousin, and I over to the Loket tributary in between the base gps station (on bedrock) and the main (continuous) station on the ice. We had forgotten to bring an ethernet cable so couldn’t download data from two of the 4 GPS stations, but Martin and Chris went back to to do this later in the day while the rest of us packed up camp. Luck had it that these stations were also in great condition, two gps stations had to be slid to the side a bit to get away from streams. While we did this Chris flew out with Paul to collect memory cards from the other two cameras. By two in the afternoon we were packing up and heading out.

Leaving was bittersweet in such a wonderful place, but with all this gear and people it’s nice to get out when you know the weather will be cooperative.

Black Rapids Glacier: Summer 2014
The theme of this season was certainly "precipitation". I kept thinking about the Forrest Gump quote, "One day, it started raining, and it didn't quit for 4 months". Luckily we...
148 Likes