I’ve been getting ready for our June field work on Black Rapids pretty much since we returned from our spring field work at the end of last month. We were scheduled to fly out on the 10th of June, but have decided to push this date back by two weeks since spring has come late to the interior this year.

Last year we did our summer work in late July to maintain the GPS stations and time-lapse cameras that were set in April of 2012 and download data. This year we decided to go a month earlier and stay for two weeks so that we can hopefully observe a few of the lake drainage events. We now have cameras watching over 4 large lakes that form on the margins of the glacier. In June of last year each lake took a turn to drain, rapidly providing water to the bottom of the glacier. When that happens the glacier uplifts and speeds up, and that is the motion we hope to catch this year. The speed up events are pretty clear in the GPS data, but with only 3 GPS stations on the main glacier, the resolution is not great. This year we added two GPS stations and will bring out a radar to better image the surface of the glacier in real time as well as an automatic theodolite to measure the motion with an array of reflectors on both the main branch of the glacier and the Loket, a large tributary to the Black Rapids. The main focus of this study is on the interaction of large tributaries with the glacier and how they may play a role in glacier surges. This will give us a look at that interaction during significant speed-up events with the main branch.

A lake that forms on the northern margin of the Black Rapids Glacier in the Alaska Range fills and drains over the course of a few weeks in 2012. It looks like there were a few significant snowfall events too. At least it never stays for long with these long days!

We were on Black Rapids this spring from April 21 – 28 and were not as fortunate with the weather as we were in 2012. The theme this spring seemed to be cold and wind. A few nights I would guess were well below 0° F. Of course, none of us had a thermometer so we’ll have to wait until we go collect data this summer to find out actually how cold it got (we have two weather stations with a couple of the gps stations). 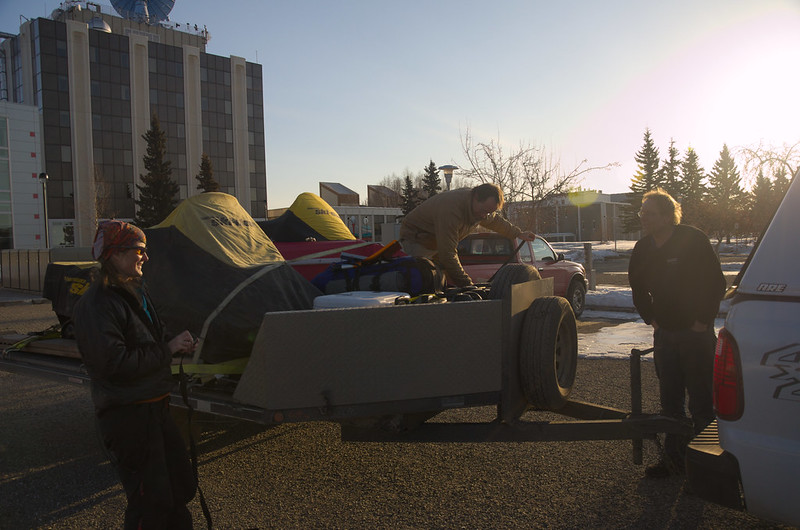 Loading our personal gear on the trailer and in the truck back at the Geophysical Institute.

Ultima Thule’s turbine Otter landing on an airstrip near the Gulkana glacier in the Hoodoo Mountains.

The week before we left for the glacier the annual Arctic Man competition was held right next to the airstrip. From the air the snowmachine tracks are visible as far as you can see. No hillside is untouched.

Viewing the pipeline and the Richardson Highway from the air.

Mountains start getting a little bigger coming into the Hayes Range.

Over the pass and the Loket Tributary comes into view.

Good view of some crevasses and the start of a moraine on the Loket.

Last year we camped on the main branch of Black Rapids near the main continuous (left over winter) GPS. We noticed then that the weather seemed a bit calmer up in the Loket so decided we would set up camp there for the week. This turned out to be a really good decision. At camp the sky was almost always clear and we could just watch the bad weather on the main branch below us.

The first of three loads out of the Otter.

With camp set up Martin takes the radar out for a test run. This consisted of two long dipole antennas (40 meters each), one transmitter and one receiver on the two sleds. For 3 days we ran transects across the glacier to map the glacier bed on both the Loket tributary and the main branch.

After Christie dug out the GPS box (under 1.5 m of snow) under Chris’ supervision, martin downloads data from the winter.

The base station was also under a little bit of snow. It sits on an elevated rock on a hillside above the western margin of the Loket. This spot was completely snow free last year.

The first day we managed to dig out a few of the GPS stations that were out for the winter and download data from them. Chris and Christe installed the seasonal GPS stations on the Loket tributary side while Martin and I started running radar sections in the afternoon. It was breezy out, but otherwise nice and sunny. The weather changed on the second day. The skies became overcast and the air was really pretty cold. The moon shone through the clouds a bit at night though.

The third day the weather changed again. This time we got whiteout conditions. Without a handheld GPS there is no way we could have managed to get any work done. With it we managed to install two more GPS stations on the main branch, dig out the third continuous station and ride up to some of the mass balance stakes high up on the glacier.

A bit of poor visibility for the day. Everything just looks exactly the same in every direction. I don’t remember exactly where I took this, but it looks like we were measuring snow depth, which we did a lot on this day

The next day looked great except for some “clouds and fog” down on the Black Rapids:

Looking down the Loket toward the main branch with McGinnis rising above everything in the area. What I thought was clouds and fog turned out to be wind-blown snow.

This was probably the most uncomfortable day of the trip. Martin and I pulled radar until the battery died in the digitizer (little over 5 hours) in really strong wind conditions. Luckily the air temps were warm enough that frostbite didn’t come easily, but the wind and blowing snow managed to burn my face in their own way. Back at camp the air was calmer, it at least looked like a nice day.

The view from camp

Another view from camp.

We had some nicer weather on the next day. There was enough visibility to get up to the Trinity basin without worrying about crevasses. This allowed us to complete new mass balance measurements, install new stakes, install a new time-lapse camera (to watch over another lake and the pot-holes area), and install new power supplies in two other cameras.

Installing new mass balance stakes up in the Trinity basin.

The lid going on the camera box above the Aurora lake (from video above).

The winter view of the Trinity basin, potholes, and Aurora lake.

Visiting the last camera site. The lake is the depression on the bottom left. We also deployed a pressure sensor in this lake.

Watching the last of the sunlight and alpenglow on the last evening:

The last day we expected an early airlift out, but then the afternoon came and still no sign a plane. We had good weather on the glacier, but the conditions in McCarthy were not so good, so Paul couldn’t get to us until pretty late in the afternoon. It was nice to see him arrive.

Here’s some shabby video too:

It was only two loads to get out since a lot of our weight was in equipment that gets left on the glacier for the summer. We had some nice views on the way out.

We made some snow machine tracks too.

The full photo set is here