After a kind of lazy Sunday where we mostly hung around camp to throw the cover on the theodolite whenever it really started to rain, it looked like the weather was starting to finally clear. For the morning anyway. 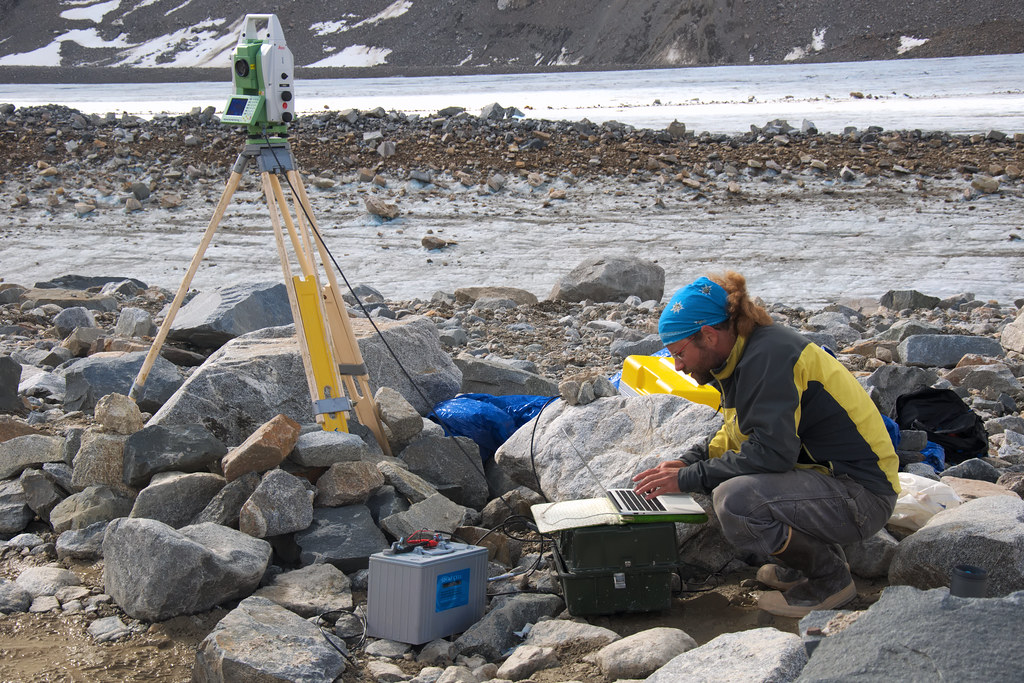 Every morning we needed to download and back up all the data collected overnight. The radar files are rather large, so to download, back-up on two separate drives, and delete data off the radar hard drive. This could take between 45 minutes and 2 hours depending on how long the run-time was in between downloads.

After cooking breakfast I took out the telephoto lens for a while. Clouds and fog were rolling over the mountains to the north making for some cool photos from our vantage up on the moraine. 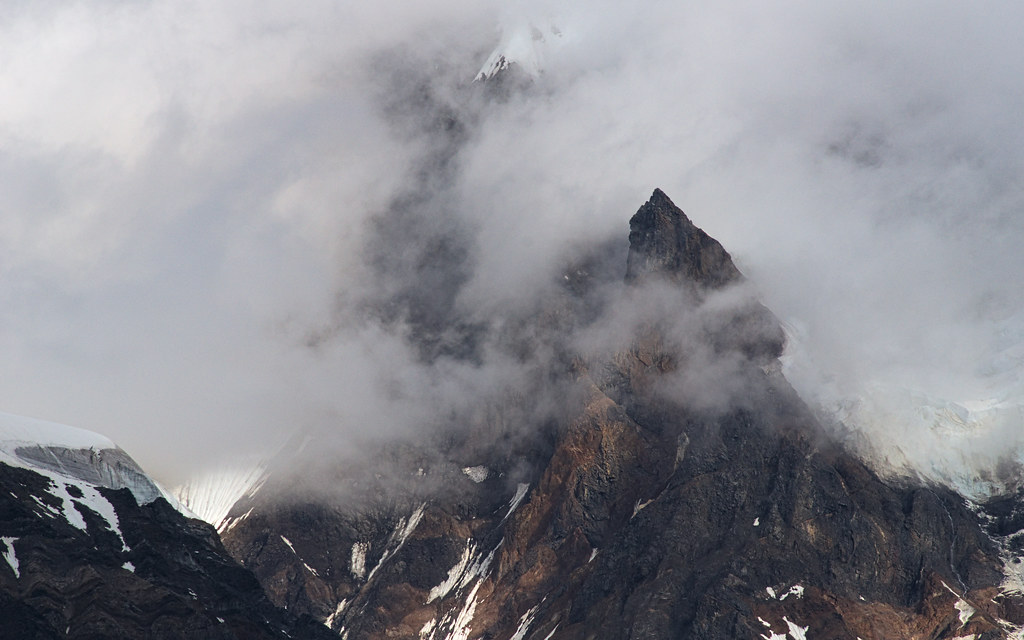 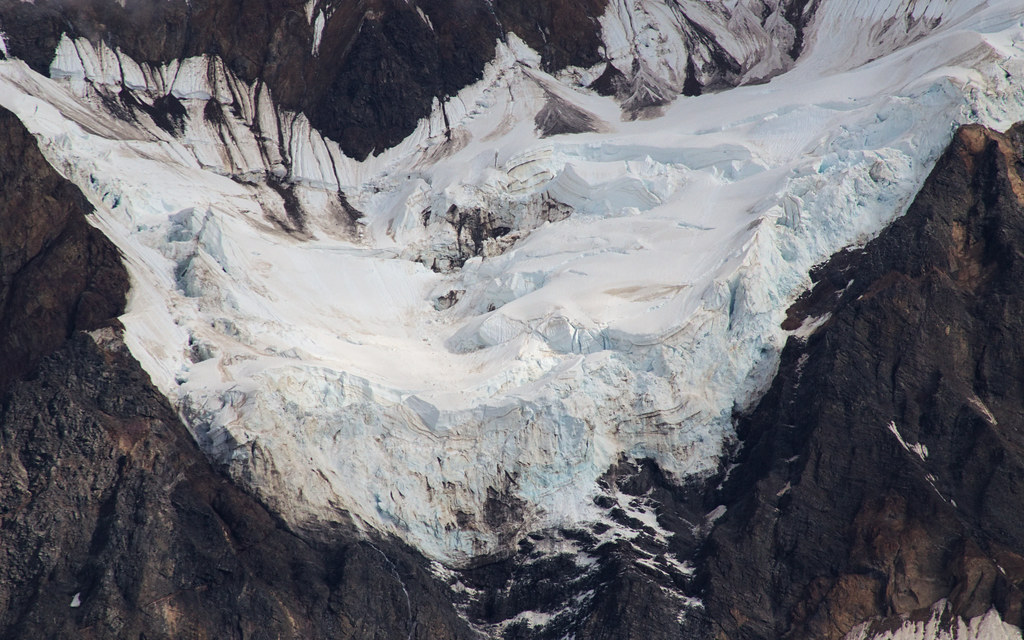 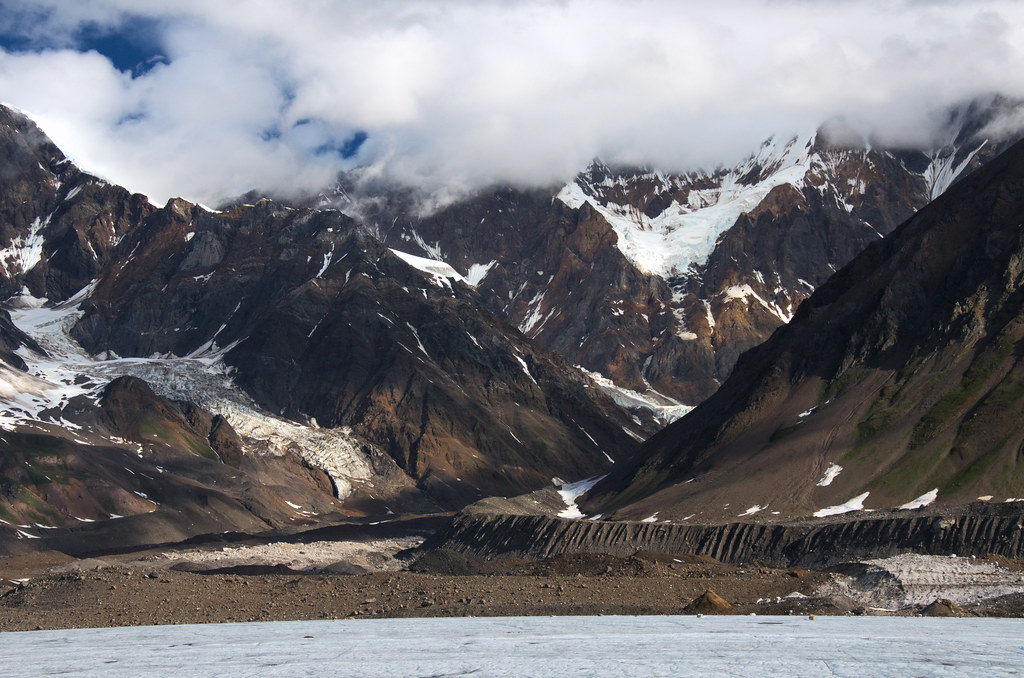 Of course, what I thought was breaking cloudcover wasn’t. Instead it just started to hail, sleet, freezing rain, then rain. The clouds filled in the sky, thick and dark. We had planned on walking a bit since the day before was spent entirely at camp. We still needed to check on the farthest upstream GPS station and mass balance site, about 3 kilometers away from camp. Adjacent to the upstream station is a cool, “little”, steep glacier coming down into the Loket tributary. We walked over to the closest moraine to it, stopping to look down some small moulins along the way. 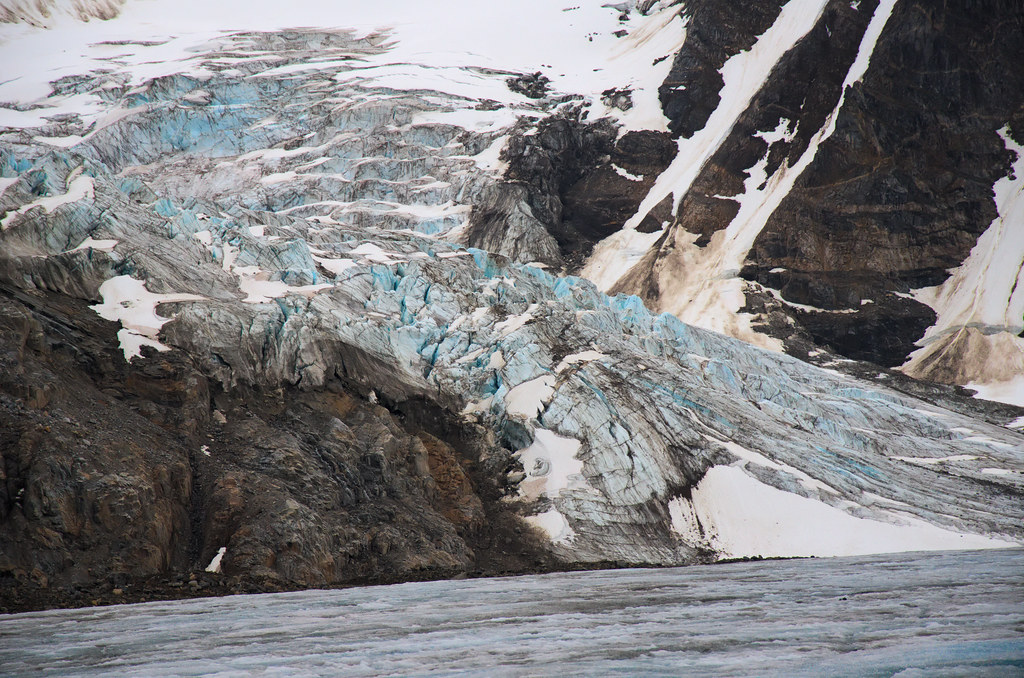 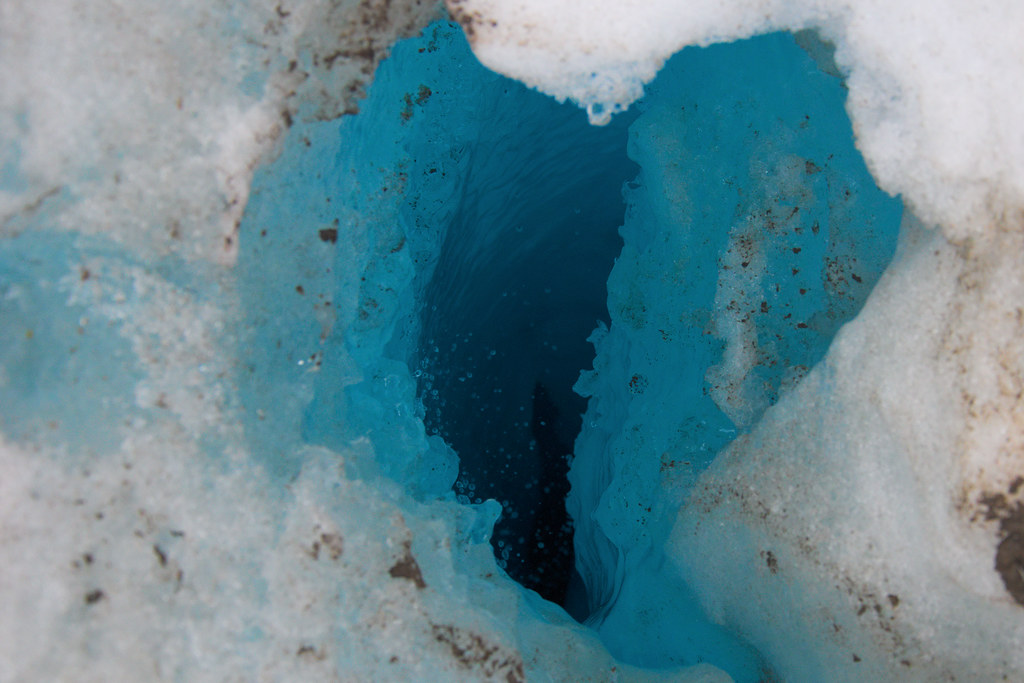 It was a fairly wet and not totally pleasant excursion. Despite all the rain, this was the first day I was starting to feel the wetness seep into my clothing. It definitely gets harder to dry things out when everything starts to saturate. We hiked back to camp in persistent rain and sleet while to the east the sky was blue. 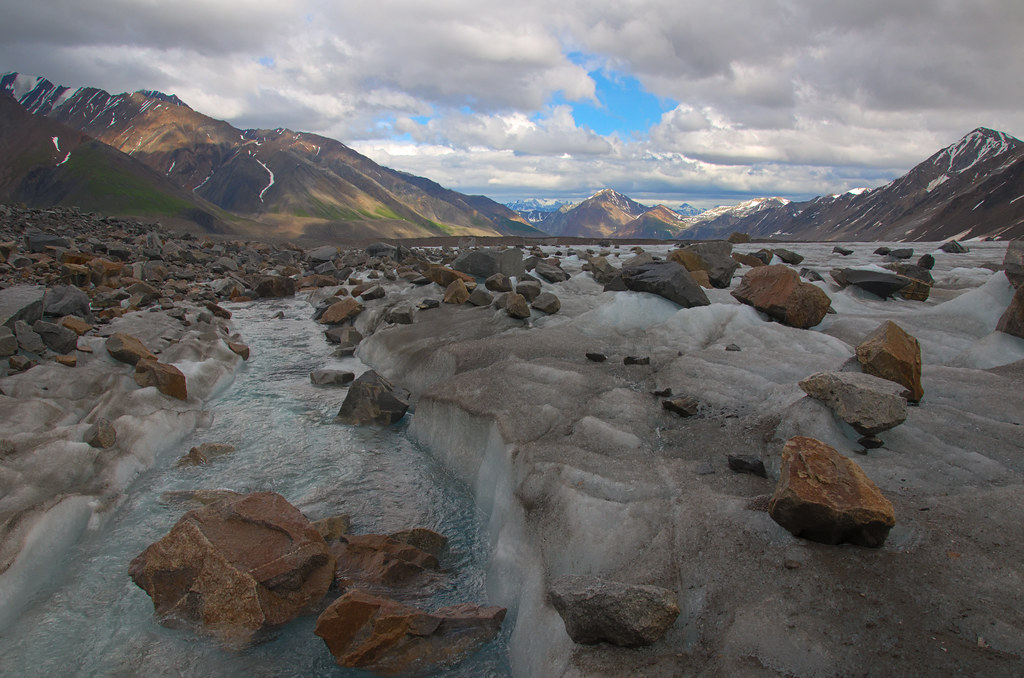 Overnight the weather did not change, still rain with some snow just a little higher up. We decided it would be a good idea to hike up to check on a reflector that Martin had placed on a hillside the week before. It serves as a fixed point to calibrate against all of the moving reflectors out on the glacier since the theodolite is moving too on the moraine. It wasn’t too long of a hike, but it rained and sleeted the whole way. 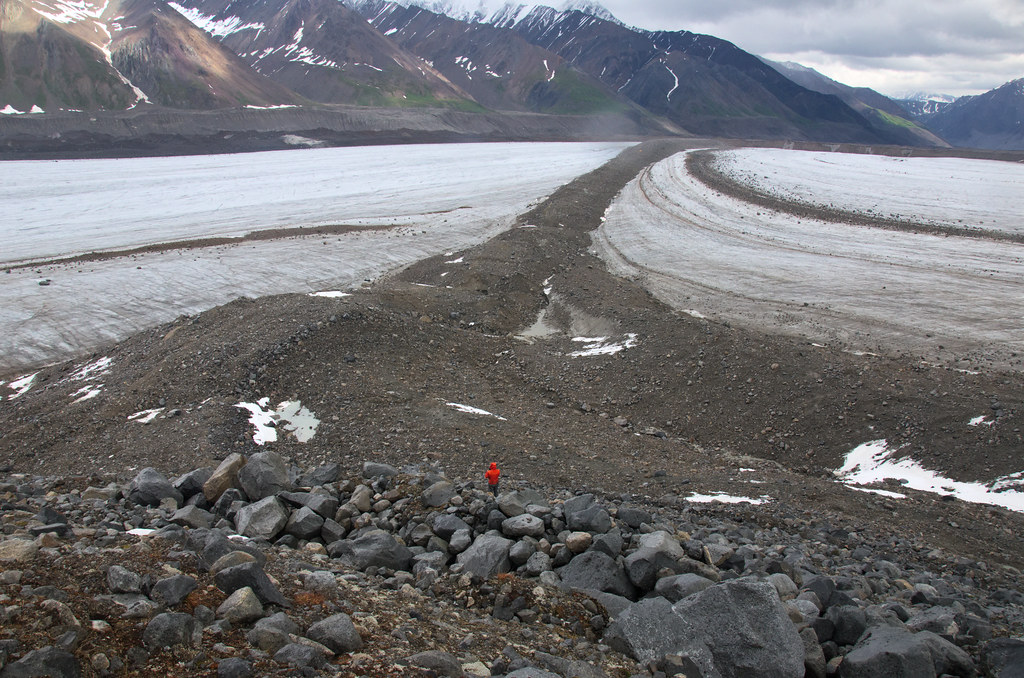 There was a great view of the glacier and tributary from the moraine that the reflector was on. If you look closely you can see the yellow dot that is our kitchen tent on the moraine . . . look closer 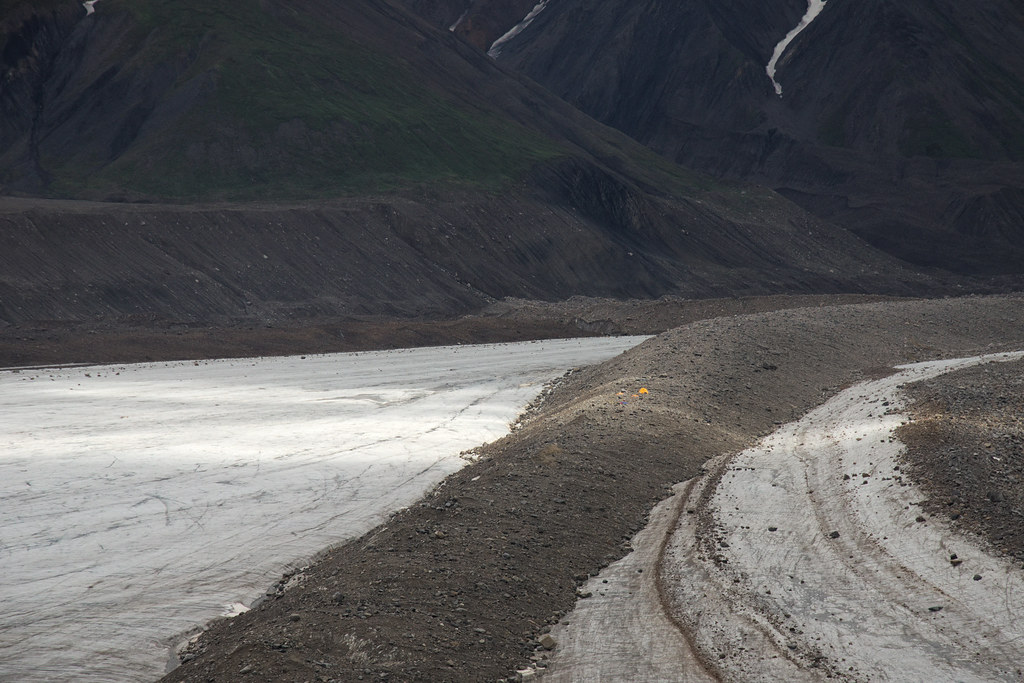 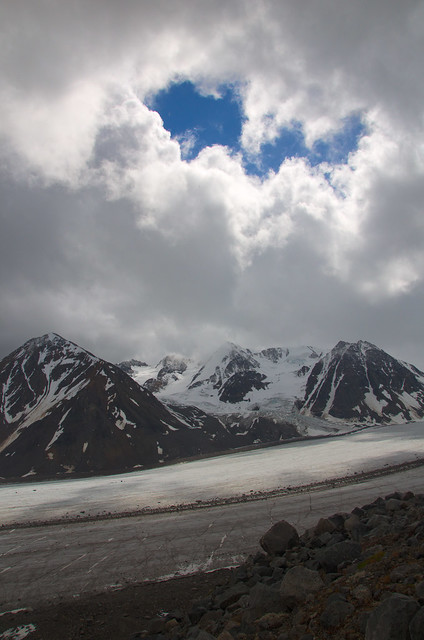 A couple of patches of blue sky traveled over the tributary. 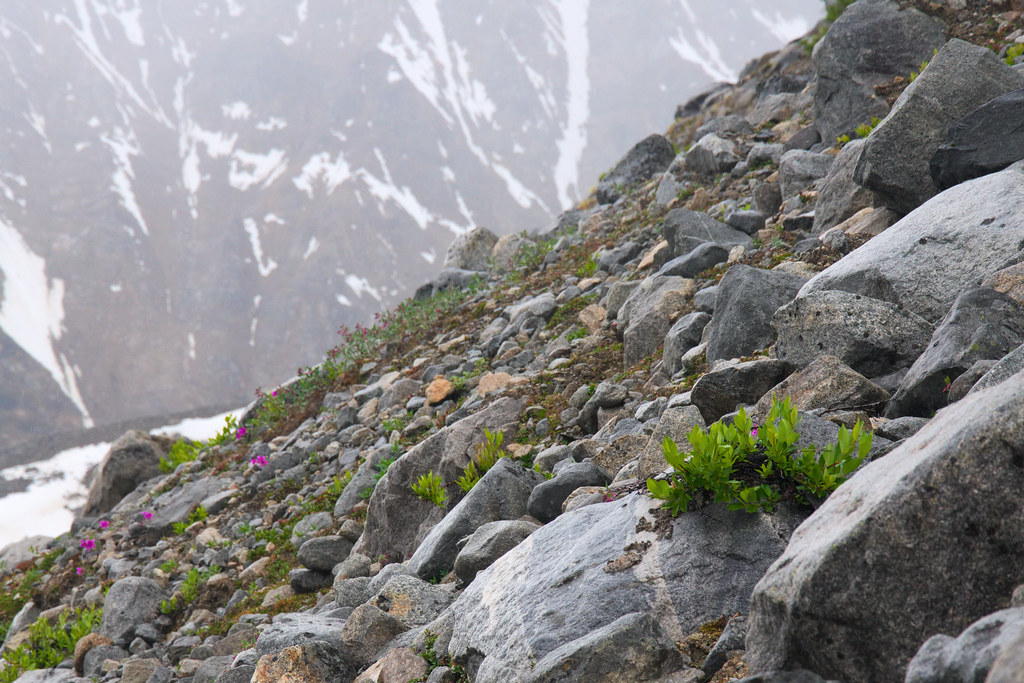 Haven’t seen vegetation in a while.

Walking down we stumbled on a really large moulin at the edge of the moraine and glacier. The water stagnated at the bottom about 50 feet down before draining further. If it wasn’t so wet it would have been fun to rappel down to see how big the lake was. Glacial hydrology is pretty cool. 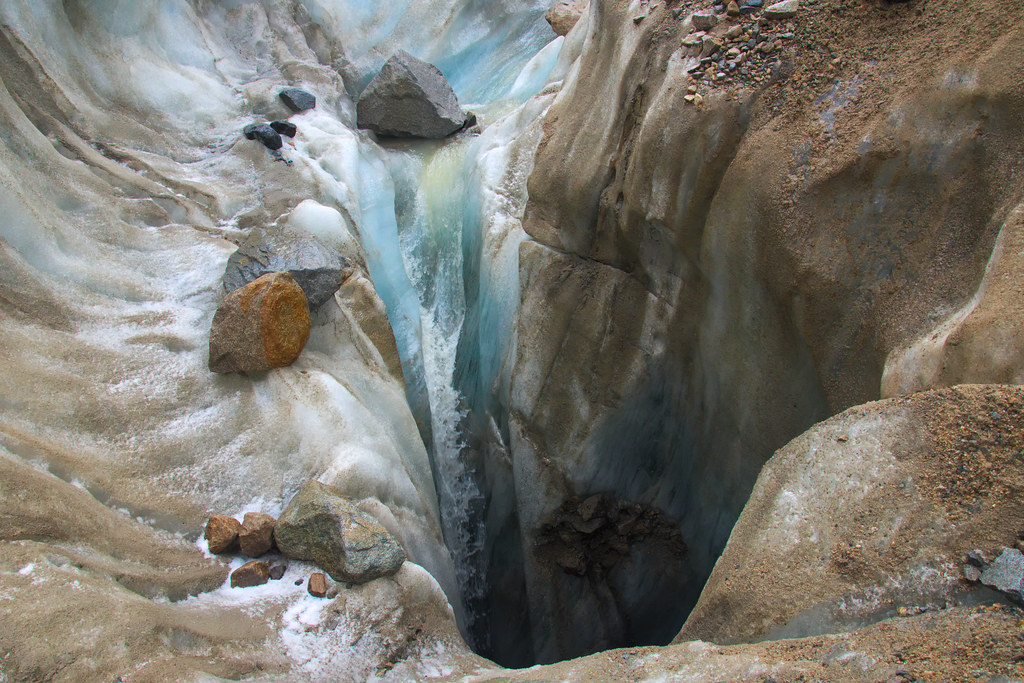 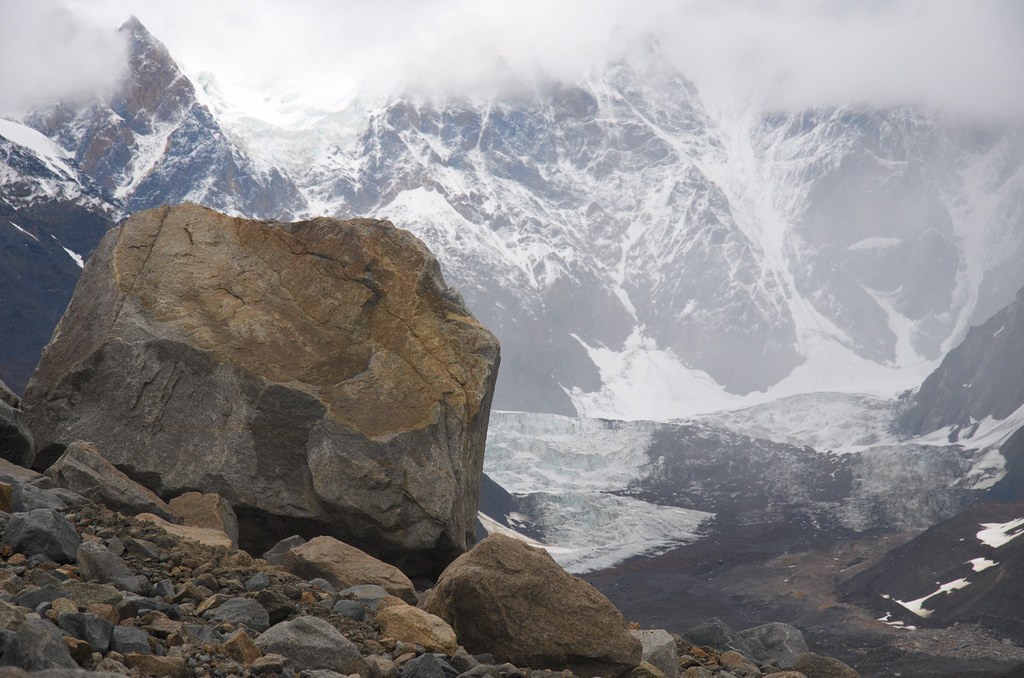 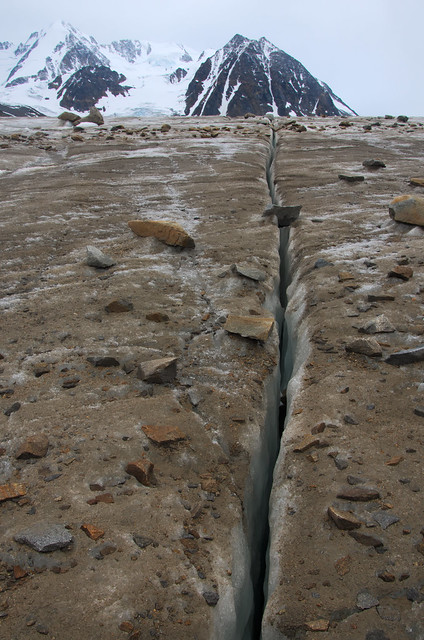 There are a few small cracks on this edge of the glacier. Nothing huge, I guess you could sprain an ankle in a few. One or two of the crevasses could maybe swallow your leg.

Overnight, into Wednesday we got more mixed precipitation. About one thousand feet higher than our camp it was all snow. It looked like there was a fair amount of accumulation as well. 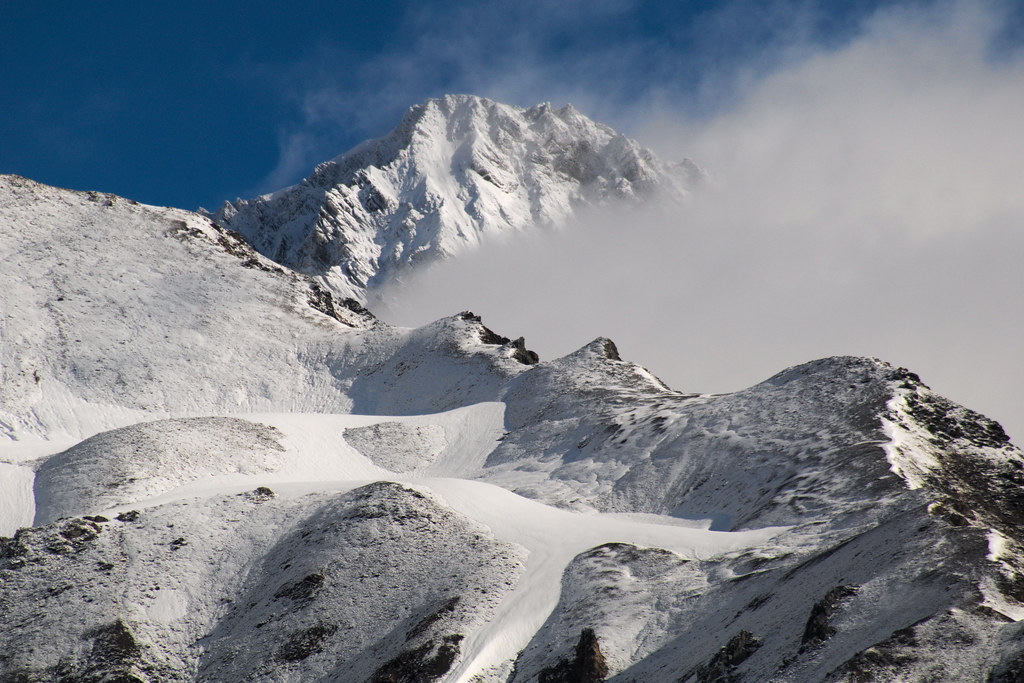 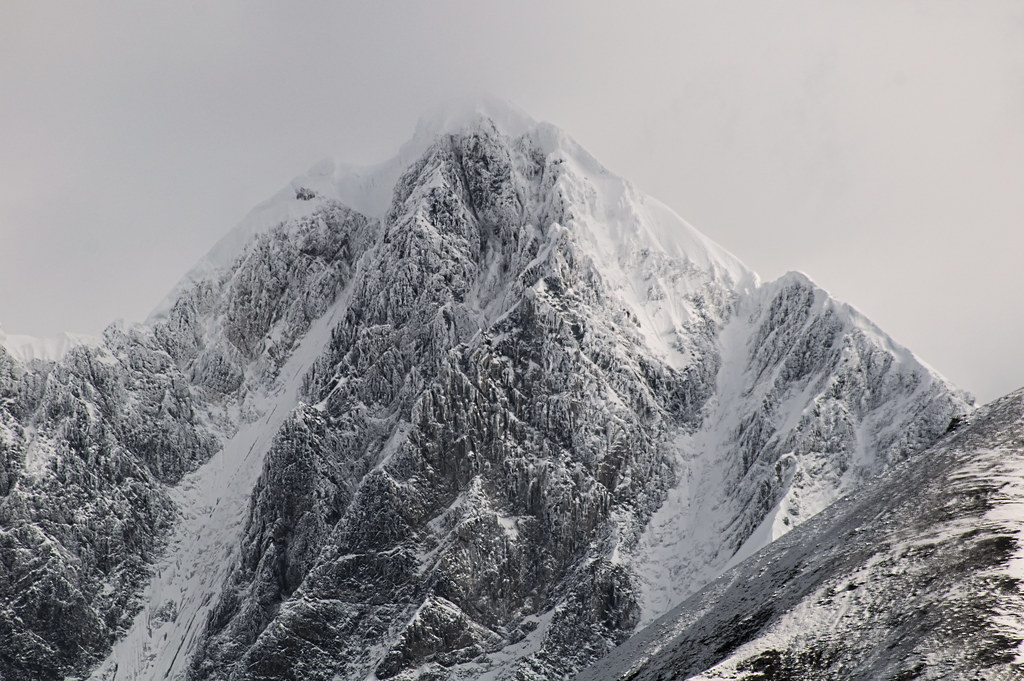 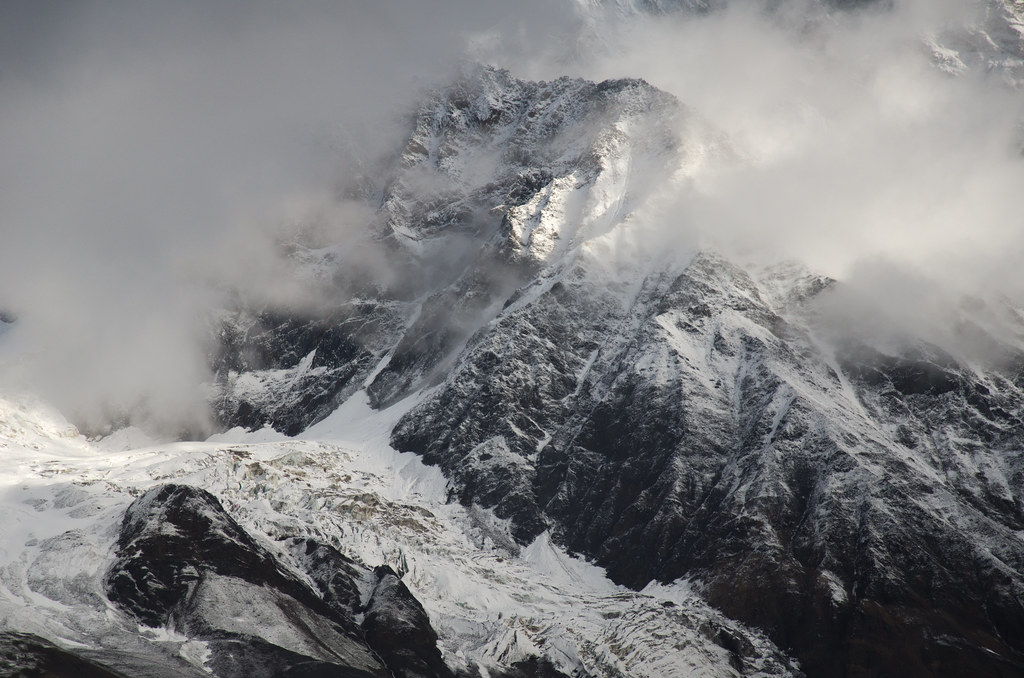 This was kind of a bummer because this was the day we needed to remove all the reflectors and take GPS measurements of their locations. Magically, after breakfast the skies cleared. It turned out to be a gorgeous day.

Thursday was our last day to finish cleaning up. We also needed to get to all the GPS stations to download data from the last two weeks. This was my first trip out to the base GPS station (on bedrock above the Loket tributary) this summer. Martin and Andy had both been already and spoke of a ptarmigan that was nested up by the box. I didn’t see the bird, but the scenery was still nice. 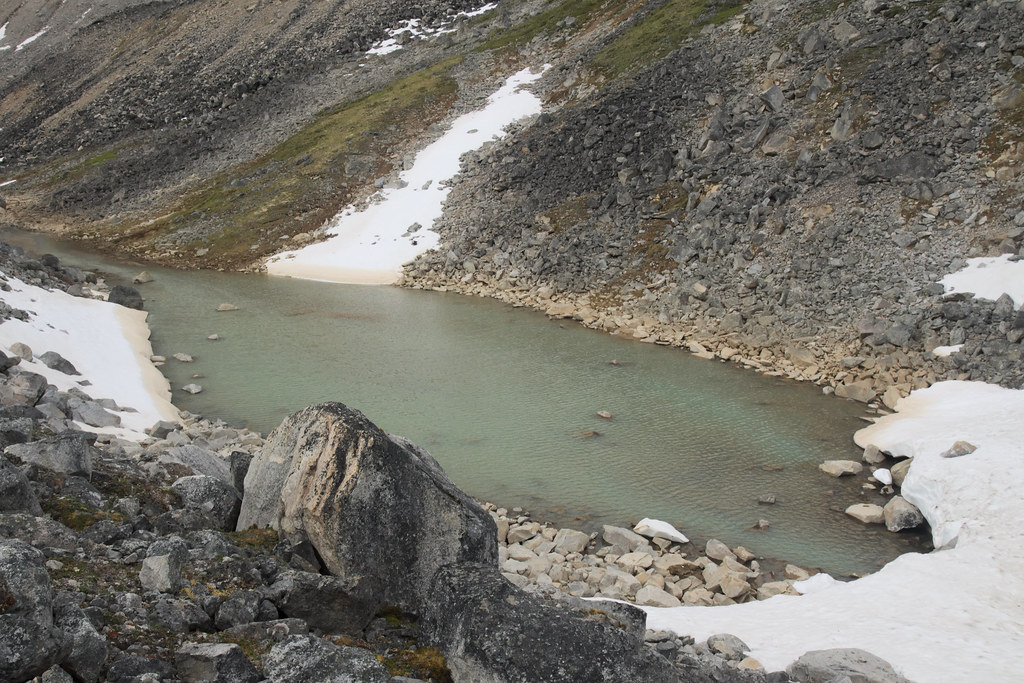 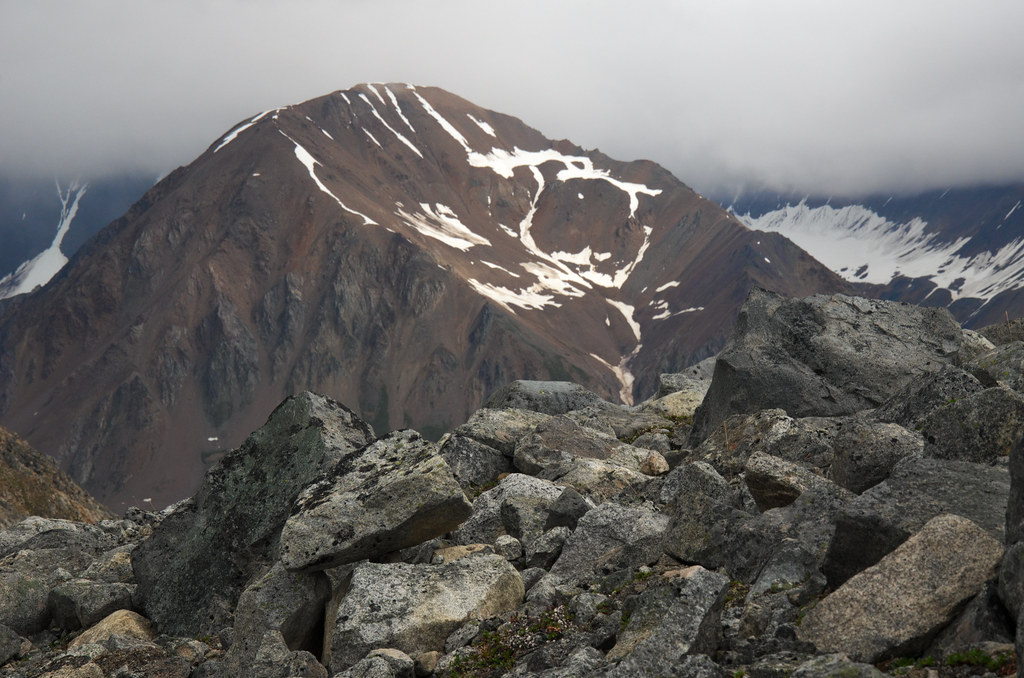 Some more scenery from the main branch: 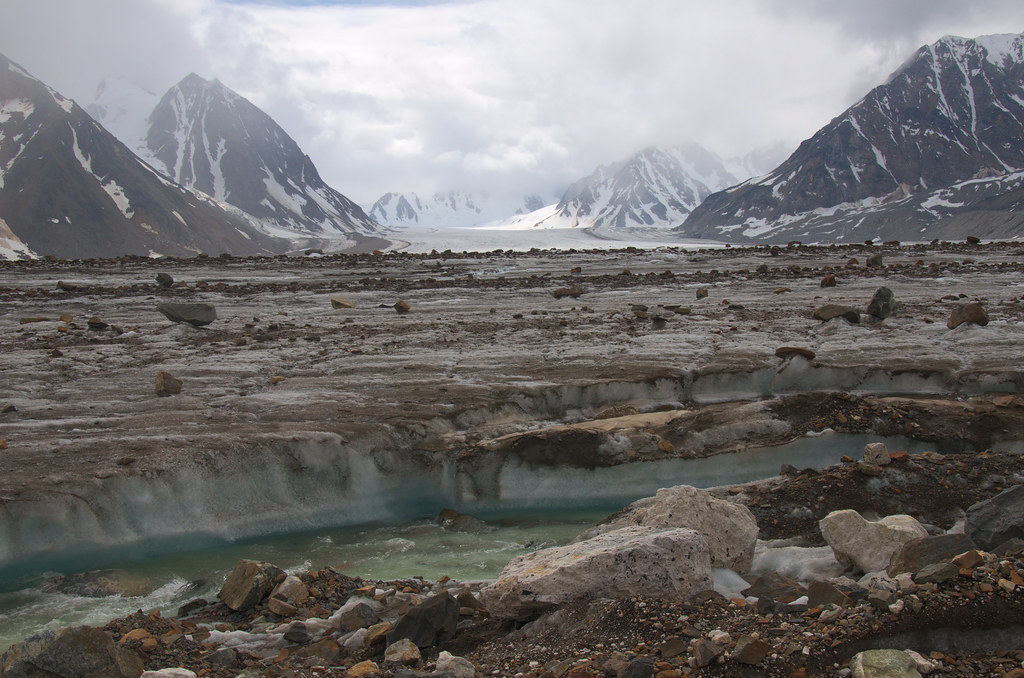 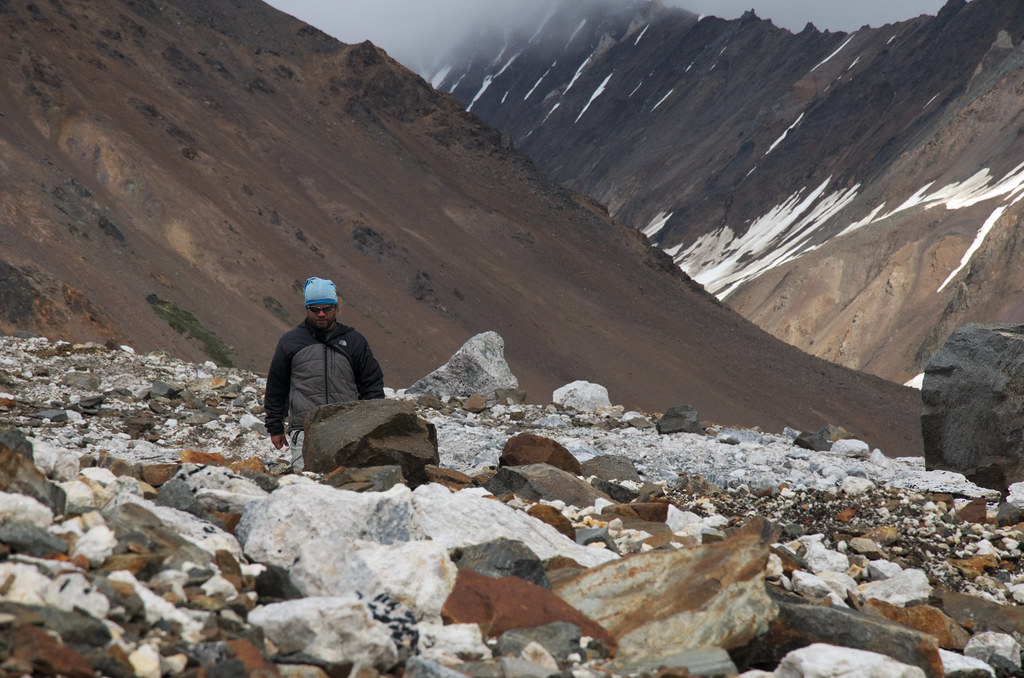 The trip was very succesful. We had run the radar nearly continuously the whole time and we collected data from the theodolite almost continuously through an entire lake drainage event in addition to the 7 GPS stations. Now comes the fun part of analyzing the three data sets to see what the response of the glacier+tributary interaction looks like from the lake drainage. Plenty to do before next season!

The next morning our pilot arrived right on time and we were out in four loads. Sucess! 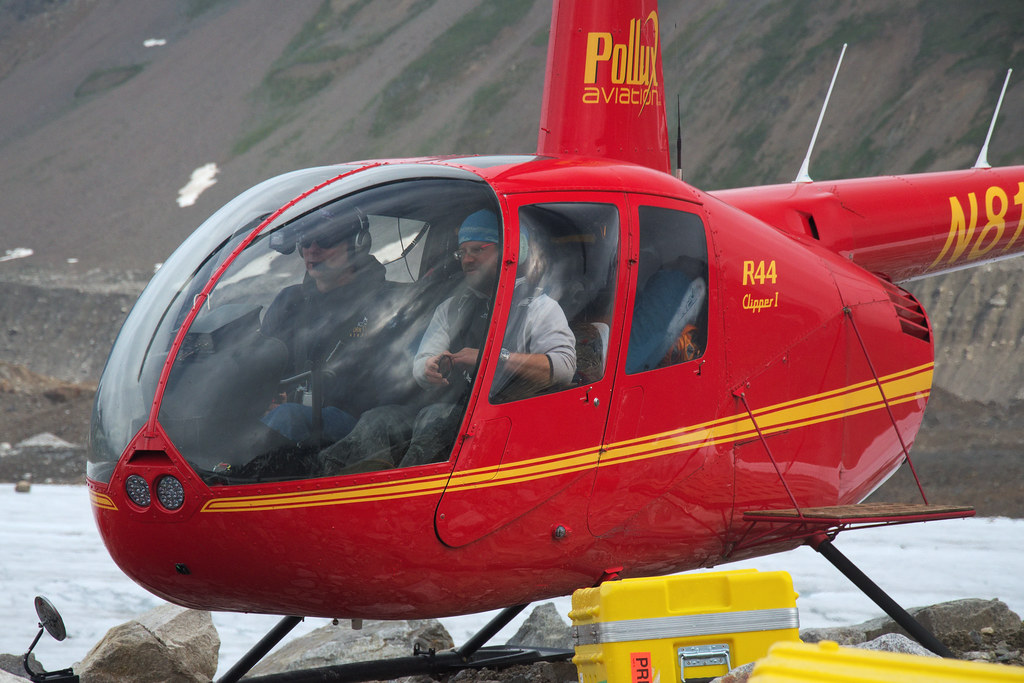 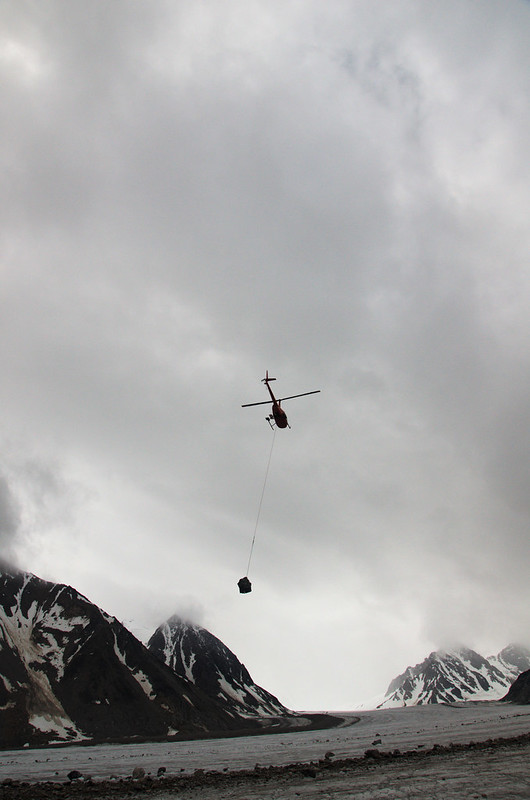