It’s so lousy when we have 15 clear nights in a row and almost no aurora, then a solar windstream crosses Earth’s path while the Sun is still up. Pictures flood out of Norway, Sweden, Iceland and Greenland, I get all ready for darkness to descend and then the clouds roll in. No doubt we missed a good show last night. This morning I went outside before getting ready for work, there was a small hole in the cloud cover over the house, and this was happening: 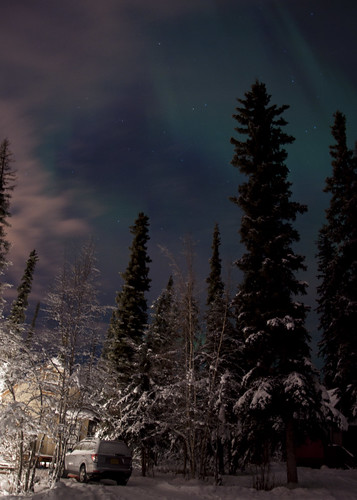 The northern lights were so bright they were even shining through some thin cloudcover. I would have loved to have seen them unimpeded. Maybe it will clear up later tonight when I’m done with my lab section so I can watch when I get home. The temperature is in the mid-teens above 0, and we can now walk around outside in just long-sleeve shirts.

When I was in Boy Scouts, I would always think that the kids from Canada were showing off at camp when they were out in t-shirts and it was cold out. Now I know that they were not; it really is relative. It just takes a few weeks of temps less than -20, and a few days at -40 or lower to put the idea of ‘cold’ in perspective. To think, at +15 it’s almost 60 degrees warmer than it was a couple of weeks ago is pretty wild.

I’ve been posting a lot of pictures on flickr lately. The most impressive subject to shoot has been the light in the morning sky. The Sun is just rising in the right location, at the a good angle and the atmosphere has had the right conditions so that the typical sight has been this:

This was taken about half and hour before sunrise, although it was pretty spectacular even an hour before:

The red was considerably deeper then.