March 21st and the first day of Spring is approaching fast. The temperature here has yet to go above freezing. Well, I guess there was that day in January, but that was just weird. Then there was that time it rained over Thanksgiving leaving us with a mess of ice that is still on the road today. Let’s see. . . November, December, January, February, March. . . about four months with no significant melting. The snow kind of packs down over time, so the couple feet we got a few weeks ago has been smashed into maybe 1 foot. A little over a week ago I was out shooting aurora, walking down a little hill where I guess the snow had drifted and I fell down into the snow to my shoulders. There’s still a lot of snow here 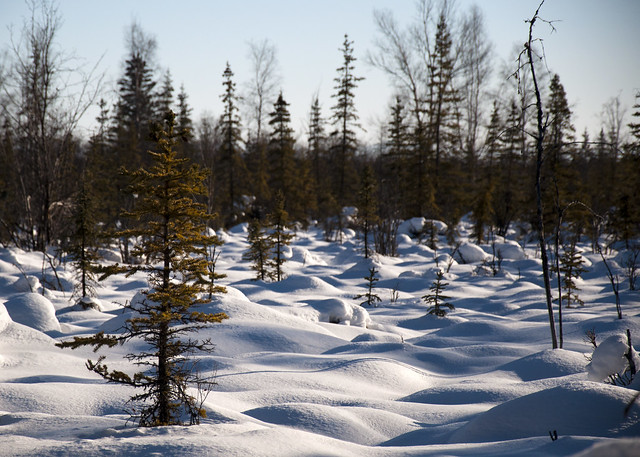 The snow hasn’t really started melting yet, but high winds a few weeks back knocked it all off the trees.

Kate went cross country skiing in the backyard yesterday. There’s something like 27 miles of trails out there. I followed her on foot and took pictures. The day-time here for 2 weeks straight has been absolutely gorgeous. Nights are still freezing cold. The month of March has been -20° F almost every night, but then the daytime temps are +15-20° F so you can go outside and do stuff. . . when you’re not bedridden with the flu. 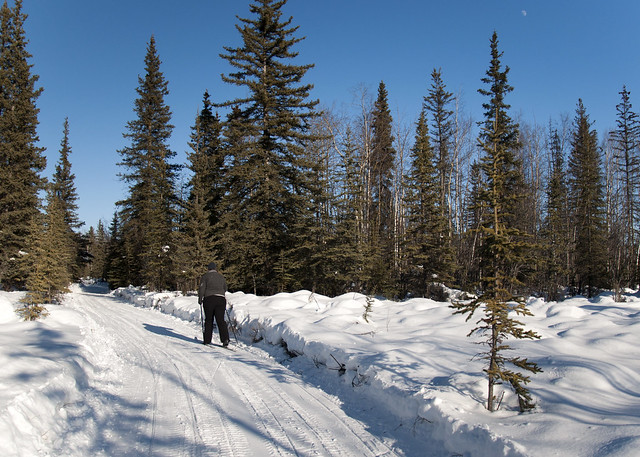 Kate goes skiing on the trails behind our house.

There are a ton of things I like about the winter here. The plowing, or lack of plowing makes driving pretty, and sometimes pretty challenging. In the northern lower 48 when the snow starts to fall the plows go out immediately, and run all night and day plowing the snow and dropping salt and sand. That sand gets thrown up onto the side of the road and you’re left with a dirty winter wonderland. Here, they wait until it stops snowing (or maybe a week later) before bringing out the plows. They push it to the side of the road. That’s it. Everything stays white and pretty.

There are moose everywhere. There are moose at our house, there are moose at school, Kate even had moose at her school in downtown Fairbanks. More of them come into and near town because they’re starting to starve this time of year. They need all the bark and sticks they can eat, and the stuff in people’s yards gets eaten last. I think the female outside our house the other day was pregnant. 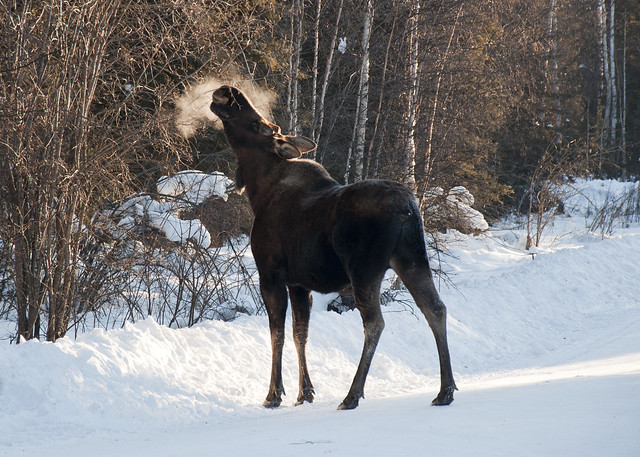 Bull moose hanging out on our road.

There is a plethora of winter activities to do here. Cross-country skiing is huge and there are miles, and miles of trails everywhere. Snowmachining is really big too, and they pack down all the trails so it’s really easy to go out and walk. The rivers are frozen for skiing or snowshoeing or walking or snowmachining or driving, since a lot of the rivers legally become roads, and runways in the winter. They say that winter officially ends here when the first car falls through the Chena; last year it was a plane. There are lots of hot springs around and cabins you can ski to and rent in the White Mountains for $30 a night.

The aurora has been un-freaking-believable. The aurora is usually best around the equinox, an effect that’s not fully understood. It most likely has something to do with the direction of the Earth’s magnetic field in relation to the Interstellar Magnetic Field. The Sun threw off a lot of material during a coronal mass ejection (CME) about a week ago that made the aurora really active here. 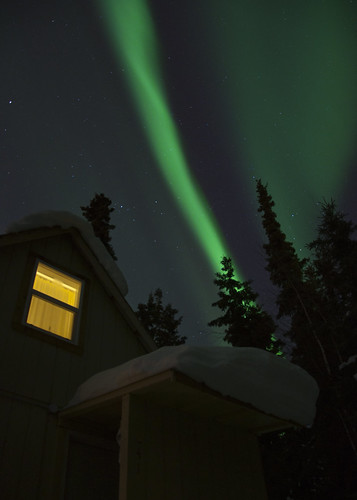 Our house on the night of March 9th, the result of a CME from a few days earlier.

The 2011 World Ice Art Championship started late last month. Kate and I bought season passes and just went again last night. I went with a bunch of friends from school the night before to play on the “death” slides. Only in Alaska will people make giant slides out of ice, with ice railings and let anyone and everyone go crazy on them with no rules or lifeguards. Past injuries of physics students include shoulder dislocations and split chins. I guess some kid broke his arm last year. There’s a huge potential for injury on these things, but so much fun to go down on a sled. 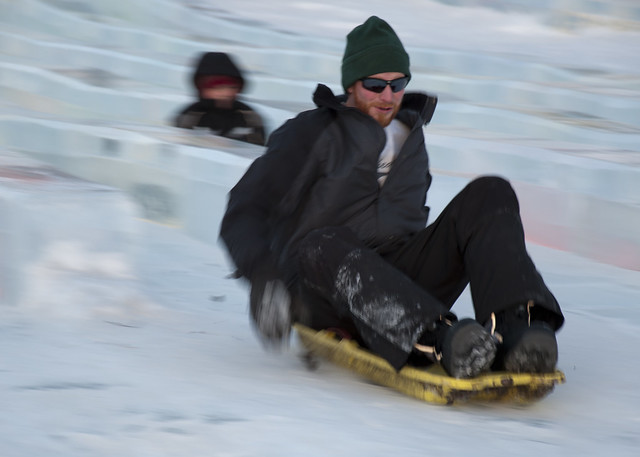 Patrick bombs down the ice slides on his dirty sled. Fun to watch, funner to do.

It’s not just the kid’s park though, the ice sculptures are awesome! They do the single block competition during the first week, and then the multi-block sculptures the second week. Some of these are huge. Although, I was mostly unimpressed with the multi-blocks. Some of the veterans said that this year was really not as good as they have been. That being said, the few that were good, were really good. I was sick during the first week they were up, and in that time the first place sculpture collapsed, so I never got to see it. But, the second place sculpture was still standing and it was beautiful. Here it is: 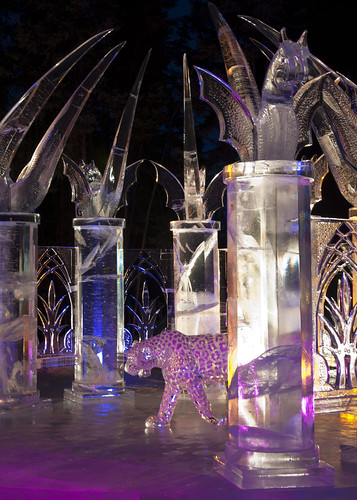 The second place multi-block sculpture and Governor’s Choice. The tail had fallen off the second night when Kate and I went. But for the most part it’s still standing and still pretty awesome. I’m loading more pictures onto a set on flickr every day. You can see them here: 2011 World Ice Art Championship: a set of flickr

I’m still looking forward to warmer temperatures and green grass. Winter here is long and its weird to look back on pictures of summer because I don’t really remember it. But, while we wait there’s still plenty of fun to be had. Soon a lot of big cross-country ski races start up, and a few running races when the temperatures start to warm up a bit. Time to get ready for 5k’s!

Welcome 2018
I'm not big on New Year's resolutions, but I'm still resolving to write more and take more photos in 2018. I've been occupied with work the last couple years and...
343 Likes