Since I sat down to start editing some pictures tonight about thirty waterbombers have flown directly over the house. Our home is on stilts and it rattles a bit when they fly over. We are apparently right in the flight path between wherever they are filling and a massive wildfire burning on and near Moose Mountain just north and west of us. Earlier today I saw a lot of smoke down south of UAF. When I left this afternoon to pick up Kate I saw more smoke and fire engines going in every direction. Then while driving on College Rd. I looked north to see a massive fire and smoke billowing on the northern hills. I picked up Kate and we drove over to Denali Elementary School. On the way we saw the fire burning on the south side of the city. It looked like it was pretty well contained. When we got to the school I got my first good look at where the northern fire was. Of course our house is right in between this and us so we drove over to Ballaine Road to get a closer look. There were quite a few people pulled over on the side of the road to watch this fire burning on the hillside. Hopefully the homes in the foreground are not in too much danger. The fire at this point seemed to be moving in a more eastern direction (to the right). A waterbomber flies into the middle of it (center right).

Our house is miles away and is in no danger from this as long as the winds don’t shift to the south (which is doubtful). Occasionally huge flames erupted from the front of the fire.

As I’m writing this it seems the smoke north of our house is getting lower and the waterbombers less frequent. Hopefully that’s a good sign. Here is a link to the latest story in the News Miner:

All the firefighters and pilots need a huge shout out and an even bigger ‘thank you’. This was quite an impressive show of bravery! There was never not an aircraft flying into the middle of the smoke. I’m sure people lost homes in this, please keep them in your thoughts. Hopefully no one has been injured. Smoke rising behind the UAF campus from the Goldstream fire. 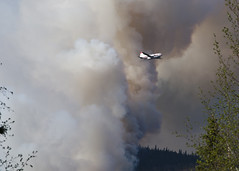 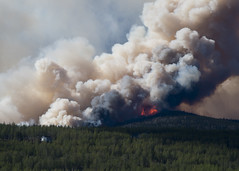 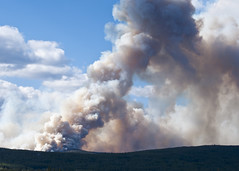 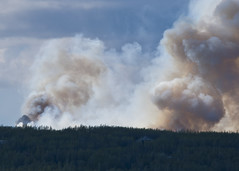 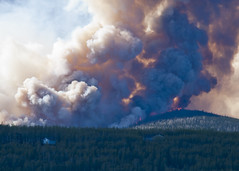 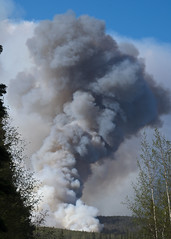 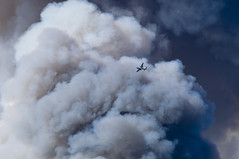 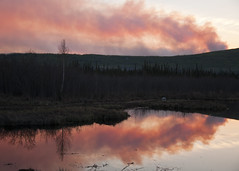